I hope I’ll be able to answer few requests you can found there:

The answer describes procedure allowing change screnshot names in GNU/Linux (Debian Bullseye), but XPI files should be working in Win as well (not checked).

I assume you are acquainted well with the owners issues in GNU systems. I use Midnight Commander for every system doings (editing etc). Red background in MC windows informs me of root ownership (green was chosen for me, the main user). 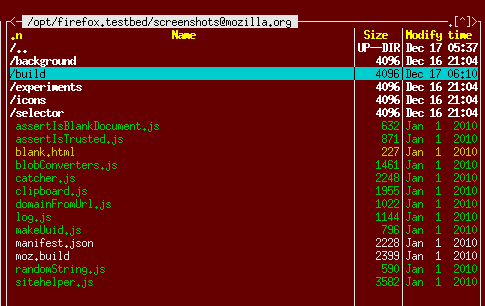 Here I must stop. I beg your pardon, but you have to read the javascript code yourself. No place here to play with it, but the function code can be changed with a small intellectual efforts (for those who dares

). I did my homework, so I am able to share with forum readers my four xpi files which change Firefox screenshot names.

Anyway, there are some caveats. The first sad thing is that Firefox accepts original screenshots@mozilla.org.xpi name only (to my scarce knowledge). The good is that you can change the contents. The second bad issue - after selection of new xpi file you’d have to reload Firefox.

Do remember to remove (delete or move to other directory) original file screenshots@mozilla.org.xpi. Otherwise you will not be able to create symlink to original xpi name.

Screenshot I created and which illustrate the above text are placed in Yandex disk. All four versions of xpi files are there too. Use XPI SOURCES address presented at the beginning of this mini article.

There you’ll find a special image ssfx_0007.png (below). It needs explanation.

Numbers 5-8 concerns domain worldometers.info.
No.8 comes from *.domain.pathname.xpi.
No.7 was created by *.filename.127.xpi.
No.6 is result of *.filename.limitless.xpi.
No.5 name “produced” original file *.filename.255.xpi.

That’s all. Thank you.