The removal of the Dissenter extention

i said mozilla are NOT interested in facilitating bigotry and ignorance.

i will be moving to brave, thanks for bending to the far left minority sjws,
i had use ur browser for 5 years now and even supported you, not anymore.

Once the Dissenter add-on is prevented from working on Firefox completely then users that would want to use it will have to enter
“https://dissenter.com/discussion/begin?url=” in the address bar and add the address they want to see behind that. Sure, its no command-prompt yet, but its not user-friendly either.

As for your question if services that allow you to search for bombs online should be banned? Of course Google and other search-engines should not get banned!

Fair enough, Mozilla appears to be more hypocritical than previously thought, thanks for the info.

Echoing ALL of this! My posts are hidden due to 10 people being ‘offended’ by an opinion they do not share
_ Enough! Build a good Browser, and give US the USERS the choice of what we use, what we say, and how we say and use …
Down with Protectionism and UP with censorship-free and open networks.

I have been an adult for some time and I am able to decide what is and what is not appropriate to read or comment on. I don’t need a crowd of sanctimonious developers and product managers at Mozilla deciding what I can and cannot read.

The silly lefty twits and SJWs that have no understanding of the implications of what they are doing are very very irritating. Mozilla should immediately enable the Dissenter plugin. After all I can easily use it by going to www.dissenter.com The whole thing is pathetic. Makes me want to change browsers.

I have been an adult for some time

sanctimonious developers and product managers at Mozilla deciding what I can and cannot read.

Who, at Mozilla, has prevented you from installing the extension?

They have removed Dissenter as a plugin. I wish to use it. It was available. Now it is not.

And I am 60 years old. Recently retired. Worked as VP of Product Development for a large software company. I was responsible for over a 1,000 developers + QA etc. I know how places like Mozilla work. Some Product Manager (or Safety Manager) makes a decision based on the complaints of a few lefty SJWs and since a lot of these introverted developers are lefty too they happily comply. There is not deep thought. Just Virtue Signaling and doing the ‘right thing’. Few of these low level decision makers have any understanding of the ramifications of their impicit censorship.

Now it is not.

It’s available as an add-on, an extension, usable: 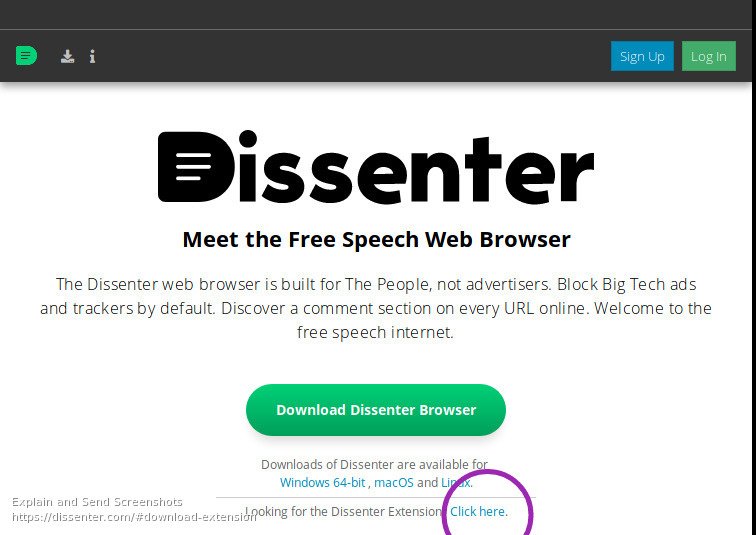 Creating an account to let Mozilla know that I have officially moved ALL my machines and work users off of Mozilla. Not only do I despise what you have become as a company and your “mission statements.”

You have severely crippled my business by wiping add-ons and extensions in preparation for your new policy of only ZOG approved software.

Believe it or not people rely on extensions and add-ons to do things your browser can’t for work. Such as monitoring and security.

Even though I never used dissenter seeing this really set me over the edge. If all you can pull out is 3 people saying some mean shit in a comments section as justification you must think we are all VERY stupid.

Luckily for people wishing to use Dissenter they have developers that are working hard enough to have provided manual install instructions… But Mozilla got what they wanted, the barrier to entry has been raised beyond what almost anybody will go through.

Congrats, it’ll be nice watching Mozilla fade to nothing while Google slowly buys and destroys everything.

What? Is that a feature of Dissenter?

I was not aware that the Brave Browser now supports extensions. That’s great news.

Nevertheless, an independent platform aside from Chrome is important.

Many companies and organisations are taken over by neo-marxists, because that’s what our higher education now produce - indoctrinated people that don’t even realize that they are fools that don’t understand where their indoctrination will lead to, as they did not study communist history. I guess 100 millions dead from marxism trying to impose equity is not enough, they need to kill a billion in the name of equity (equality of outcome), because you need to kill at least that amount to achieve your goals. It always starts with stifling free-speech, because their ideas don’t hold up when you have free exchange of information. (truth will always crush lie in a fair fight)

And it will get only worse because these schools are not stopping. These companies and schools are lost, we just need to allow time to swipe them out of the market (as marxist do not understand market forces very well, this is they say “go woke, go broke”) and build free-speech system and ignore those inter-nazis (international socialists/marxists/neo-marxists). Technology (like blockchain) is on our side. Next economic crisis will bring many of those zombie companies/organisations down, as indoctrinated people are unable to have an independent thought and investigate. They don’t understand the ponzi format (fortunately!) of our monetary system.

Soon we will have internet that will be much harder to censor, as it will be completely decentralized. This is what anti-free speech advocates like Mozilla organisation will push society to do. Thanks Mozilla, for helping make this happen. But before it gets better, it will probably need to get much worse. So every time you read news like that “firefox banned dissenter” maybe it is bad now, but it has good long-term impact. (it’s like fighting addiction - painful now, good for the future) So keep your heads high, guys and let’s by-pass these marxist tactics.

What do you expect from a company who forced their CEO to step down in 2014 after he made donations to opponents of gay marriage. More from the “tolerant” left. They are tolerant unless you don’t agree with them.

Governments and mainstream media companies hate free speech. SO, of course they would seek to ban DISSENTER.

There is also a bookmarklet method to use DISSENTER on any browser.

A simple bookmarklet for Dissenter.com that allows you to comment on any web page on the internet. Also included are instructions on how to use Dissenter more easily on Android. I made this project...

Warning: Mozilla has updated its add-on policies and is now proactively blocking extensions (as of v60.x+) that are found to be in violation of their policies (Dissenter) …

Note that Dissenter is not blocked by Mozilla. Gab’s extension was removed from Google’s Chrome Web Store and from addons.mozilla.org.

A Wayback Machine capture of Mozilla’s then policies:

– and related conditions of use:

Mozilla has not revoked the add-on’s signature, so Dissenter can be distributed while guaranteeing that the add-on is safe and can be updated automatically. Manual installation of the extension from Dissenter.com/download is also possible.

Whilst https://dissenter.com/download#download-extension no longer works – a Dissenter web site bug – users of the service can get r12 of the extension (2019-05-06) at https://github.com/gab-ai-inc/gab-dissenter-extension/releases

https://github.com/andreicristianpetcu/gab-dissenter-extension/releases/ no longer available, probably removed by the developer – not by Mozilla. For posterity (I’m not a user of the service) I have version 0.1.5 of this extension, installed 2019-05-07, in an unused profile.

many people will have to revise their take on moz://a

many people will have to revise their take

Do you disagree with the current Conditions of Use (Acceptable Use Policy)?