the first version of Xmarks supporting WebExtensions and e10s.

Further investigation suggests to me that update installation failed. A repeat installation was successful, I’m now using 4.5.0.1a with Firefox 55.0.3 (64-bit) on FreeBSD-CURRENT so I’m asking LastPass what’s meant by ‘not supported’.

How can they not support 64 bit FF? What year is this? Also… it’s JS, it does not care what CPU it is. Lastpass sucks.

How can they not support 64 bit FF?

From what I read, 79% of Nightly channel users and 7% of Release channel users on Windows are already running 64-bit Firefox. (May be more now; those numbers are from a May 2017 Bugzilla comment.)

And that will become a much bigger problem for LastPass soon.

Come October, the proposal is to migrate Firefox Release 56 users that have a 64-bit windows with more than 2GB real memory to the 64-bit build of Firefox with a 56.0.1 upgrade. (At least 2GB? More than 2GB? There has been discussions about that in one of the Bugs. Also, there are opt-out possibilities by setting a registry value, or by uninstalling Firefox and reinstalling a platform/language/build-specific version.)

So, by the time Firefox 56.0.1 lands in the Release Channel, LastPass will have lots of 64-bit users. If they don’t support 64-bit users then, they may find their users looking for alternatives.

it’s JS, it does not care what CPU it is.

That is the important issue. While Firefox can have 32/64 bit versions, there is no such a relevance to WebExtensions.

Unless there is an extension that deals with hardware (legacy ones could but WebExtensions cant), for the extension operation, there is no relevance whatsoever whether the operating system is 32 bit or 64.

Therefore, the assertion by a developer that a WebExtension (i.e. password type extension) does not have a 64 bit version, seems misplaced.

The only way a 64 bit OS may become relevant is that if the extension relies on an application that must be installed on the user computer and then the WebExtension uses Native Messaging to communicate with that application, then if they don’t have a 64 bit application, that may be an issue, although 32 bit applications run fine on 64 bit OS.

I use Lastpass on Firefox ESR v52 x64 on GNU/Linux daily. When I saw your message I started thinking that maybe this is a Windows issue. Installed Windows7 x64 with 3G RAM in a VM and Lastpass works fine in Firefox v55. What am I missing?

… Lastpass works … What am I missing?

was purchased by LastPass

– and priority support tickets in that area are handled by LastPass.

The issue was not reproducible.

When I attempted to reproduce the issue: an Xmarks Bookmark Synchronizer button, through which preferences can be accessed, appeared in the toolbar of Firefox.

A LastPass-provided screenshot of the button and its menu: 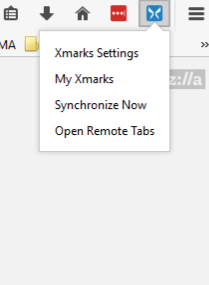 My screen recording of not reproducing the issue – the Xmarks Bookmark Synchronizer button appears at 02:23 on the timeline.:

Side note: that screen recording did capture other issues, which are off-topic from Xmarks (I’ll happily discuss those issues elsewhere).