Bring back speaker on tabs

If you scroll over tabs you can see the speaker. It used to show without scrolling. You could easily see which tab was playing audio that way. New update sucks. I hate when things get changed just for changes sake.

The inconvenience of this change made me make a forum account. Yes please, this is an awful step backwards for those of us that keep many tabs open during browsing. At least allow some kind of theme configuration option to bring back the persistent audio playing indicators. Absolutely a regressive change.

There is a textual indication with Normal density, but based on numerous forum posts, many users are not noticing it. Obviously in this image, the tabs are at their full width; the problem may arise with narrow tabs?

OMG why remove the audio indicator?? Now I spend MINUTES trying to figure out which tab is playing audio because I always have many dozens or even hundreds of tabs open at any given time. THIS IS MADDENING !!!

It’s hard to distinguishes. Text one is hard to see and when narrow down it disappears. When will Firefox try to itterate slowly on UI rather than betting every 4 years like this. Does this happen only to justify UI/UX designer?

If anyone reading would consider a style rule workaround (i.e., userChrome.css), I have added a large/visible speaker icon to my rule options here:

By the way, I noticed this is on the new “ideas” site a couple of times (not sure whether they will get consolidated):

Custom CSS tweaks for Firefox v4.1.0
includes the tab audio icon and has an option to change the color

And now it’s gone entirely. There isn’t even a speaker icon when I hover over the tab that’s making the sound. Extremely frustrating. I only noticed this today so hopefully it’s temporary and they’re working on it or something.

There isn’t even a speaker icon when I hover over the tab that’s making the sound.

Is this in Firefox 96.0.3? I don’t think it has changed since Firefox 89. This is what I see for normal density and for compact density: 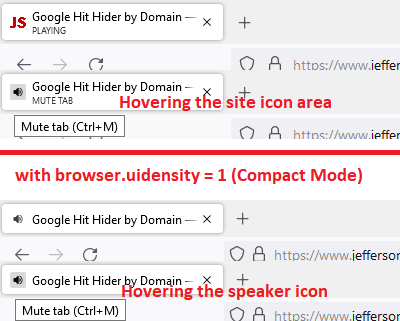 Had to make an account just to post about this. This is so deeply stupid. Everything everyone has said above is correct. How is this still not fixed?

I have to scroll over a tab’s Youtube icon (or whatever site) to see the playing speaker icon - just replace the damn website icon with a playing tab/speaker icon!

(Yes I see the “PLAYING” note underneath the tab now, but it is not obvious/as obvious & on smaller sized tabs [read: many many tabs are open] where there is not enough space it is in-arguably a worse [bad] solution.)

Did the person making this change actually use the browser? More than that - how could the rest of the organization sign off on this? The rest of Proton I haven’t noticed, except this aspect where you made my browsing experience a PITA now. I don’t want to switch to Chrome, stop doing stupid things for no reason.

In jscher2000’s post of bloglinks where people comment on (complain about) this, clueless Mozilla people say “Thanks for the feedback, if enough people upvote it our team will review it!”

How many people are inclined to make accounts posting about this rather than just deal with it & adapt? Putting aside that many people it may not affect if they’re not heavy users.

The concept should stand on it’s own. Since it IS affecting at least some users, the change is either rational & stands on it’s own or it doesn’t.

(It doesn’t. There is literally no cogent defense of this change-for-the-sake-of-change/“UI-cohesiveness” move that can argue that this doesn’t negatively affect usability.)

Usability decision shouldn’t be based on popular feedback. That’s not confidence inspiring in the competence of Mozilla’s developers. I couldn’t give a damn about Firefox’s look for the most part, I care when you’ve (needlessly) made my browser a PITA to use.

Moreover, ALL of this problem (& no doubt many others) could be avoided if you just gave users options for things like these to pick how they want them to work, but that would just be too logical.

This change never should have made it out the door of a beta let alone to a full release & then still not fixed after almost a year. It is embarrassing that this has not been fixed almost a year later. Not confidence inspiring, makes me contemplate switching browsers.

Mozilla needs a Linus Torvalds to tell the gaga-eyed hipsters chasing after the latest in “design language” trends to stop doing stupid things.

well, many people just joining /r/firefox at reddit.com, even half of Moz force are there included their engineer. I never seen any engineer replying to casual user here like at reddit. How about shutting down and use reddit instead? They already know that this discourse really dying…

They already know that this discourse really dying…

Mozilla recently started up a new “Ideas” site at https://connect.mozilla.org/ to replace the Crowdicity site. So far, most of the focus seems to have been on unhappiness with the new download flow in Firefox 98, but there are a lot of other ideas on the site to vote up or add to. Will it work? I really have no idea.