This poll shows majority support, as does reading the comments on this thread.

In fact, in terms of scaling, we may want separate Discourse instances instead of one that covers every area within Mozilla.

Right - but for the time being, given the current number of users using Discourse, it makes more sense to use the categories view than keep the discussions view while waiting what will probably be a long time for a decision on multi-Discourse. I wouldn’t support making the change to different Discourse instances without lots of thought and discussion, because its a huge change. This isn’t.

True, but that doesn’t mean that we shouldn’t actually put some thought into the decision.

From what I’ve read, quite a lot of thought has been put into the decision. I’ve only just joined the discussion, so you’ll have to forgive me if I’ve got the timeline wrong - but as it stands, there’s a number of arguments in favour of defaulting to the categories view, and not many in favour of not.

@yousef made the change with nary an announcement or taking into consideration the ordering of the categories, so @tanner reverted the change very soon after (after I expressed an issue with this as well).

The ordering of the categories issue seems like a rather minor one, which while may be an inconvenience, doesn’t make it necessary to throw the baby out with the bathwater. As I said above, the categories view isn’t currently perfect, but it’s illogical to not switch to a better default view because it’s not perfect.

There’s also something very wrong with Community IT if people are overriding what the module owner has decided, without their approval.

Changing the default entry page for a website is a huge UX decision, no matter how easy it is technically.

Let’s not kid ourselves here, Discourse currently gets a handful of users, and is a testbed to see if it could get properly adopted by Mozilla. No decision here is a huge UX decision. If we’re going to get bogged down in mindless bureaucracy, Discourse is going to get nowhere within Mozilla.

No? I’ve seen maybe one Discourse forum out in the wild (aside from the one @comzeradd mentioned) that uses the categories as the homepage.

Upon seeking out as many Discourse installations as I can find, it looks like most do use the default discussions view. Despite this, there are still a number of good arguments for changing to the categories view by default.

If there’s any doubt surrounding that, let me add another argument in favour: most Discourse installations are centered around one topic. Mozilla on the other hand is a very diverse community, and some things (Reps involvement in Mozfest) have nothing to do with others (Community IT discussions). Is this an argument for multi-Discourse? Maybe, but that’s not the discussion we’re having right now. As it stands, this Discourse installation has a number of very diverse discussions happening on it, and so flooding a new user with all of them, when they’re almost certainly looking for only one thing, doesn’t make a whole lot of sense.

I don’t feel like just listing static categories as the homepage is the best way to go at this time.

Why, aside from it being the default?

I would’ve preferred if you spoke to me personally instead of making these broad statements.

I’m really not sure what you’re saying here. What broad statements have I made? I’ve merely posted my interpretation of things posted in public. Am I not allowed to have an opinion in public if it disagrees with yours?

Since @yousef didn’t want to take the effort to actually think this out (which should be his job as the module owner), he just delegated the change to us. Changing the default entry page for a website is a huge UX decision, no matter how easy it is technically.

I’m happy to help with this, I would like to understand the UX problem that we are facing here and if an alphabetical sorting can lead to any problem.

Yes, that would also make me understand better the issue. Since @yousef is the module he should take into consideration all opinions expressed here and make a final decision.

OK, here’s a good learning moment. Saying that other people do x or y is a very weak argument, because even if the majority of people do it one way that doesn’t mean that suits you best.

If we can agree on the use cases then we will agree on a solution very quickly.

What I see is mozillians that want to know more and talk about their specific area/project.

I don’t see a use rcase for a mozillian interested in all categories we have right now.

My decision on making categories the default view the first time was based on the facts that:

This isn’t really a big enough of a change to warrant an announcement, and I while I have my preference, I can’t really make a decision without knowing whether alphabetical or activity view works better for the majority of users. My opinion is that activity view works better for us now as we have a couple of active categories and a couple of inactive ones, but in the future when we have many categories alphabetical will work better so we don’t have the order changing massively every day.

We have a small number of Mozillians using Discourse who are more than happy to give feedback on what they’d like to see - We should see this as an advantage.

Since there are no longer any objections to this, we’ll make the change during our next maintenance.

We should do this as a test. We’ll be more likely to get feedback from people if we actually push the change, than just proposing it.

We could also try to find people who are on both our Discourse and Guides and see if that group of people has an obvious preference.

As long as the “firehose” page is still available somewhere for people that want it, the category list makes a much better landing page for first-time visitors, which is what the front page should be.

The ‘firehose’ view is the ‘Latest’ view, and can be accessed from the links at the top of the homepage.

The view @majken mentioned already exists to a certain extent. The ‘Unread’ view shows new posts/threads from all of the topics from categories the user has subscribed to. (Or individual threads they’ve posted into but not subscribed to that category)

The Category (now homepage) view is sorted by activity?

Correct! We also have the ability to sort manually, but we’ll see how this goes for now. 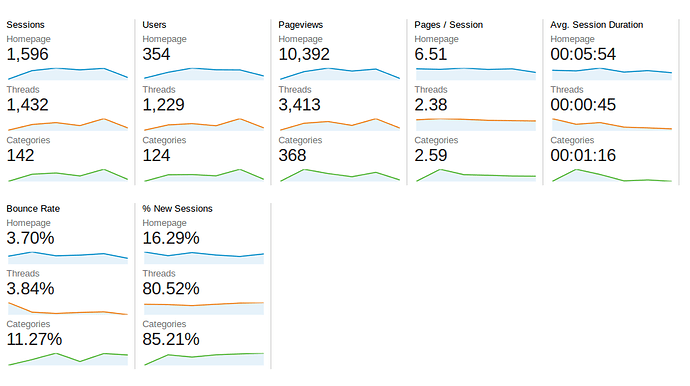 Stats for each page 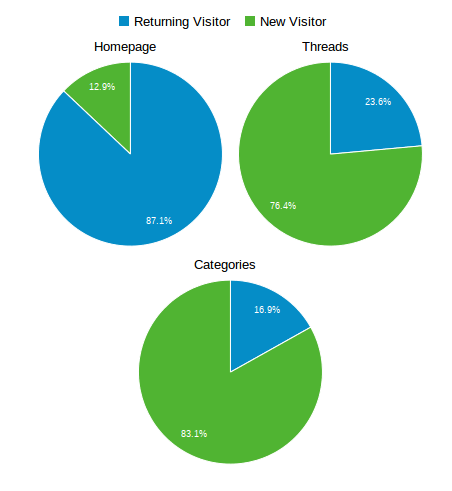 Breakdown of type of user who lands on the Homepage, a Category page or a Thread

Seems like from our analytics, the majority of people who navigate to the homepage are returning users. From there, 53% of users leave the site. From the users that remain, 48% jump straight to a thread and ~50% go to a category page.

My assumption is that the majority of users who go to a thread from the homepage are registered users doing so via their notifications. An amazingly low number of people use the links at the top of the homepage, so maybe we need to let them know those exist?

The main question is, how do we measure the success of this change? Personally it looks better to new users, and half of all Discourse users are taking advantage of it, so I’d say we should keep this change.

That is a good stat to start with. How does the stat look now? When did the change happen again?

I definitely prefer the categories page as the homepage, but it’s funny because I might not have been able to tell you that the home page had even changed. It went from being something that bugged me to something that didn’t bug me. Which is still a win, but one that is harder for people to self-report.

The change happened on 21st October, comparing the bounce rate 2 weeks before the change to the bounce rate from the day of the change, it’s gone down by 2.71%. I would still call this a good change, unless someone thinks otherwise?

A post was split to a new topic: Lose scroll position on categories page on mobile