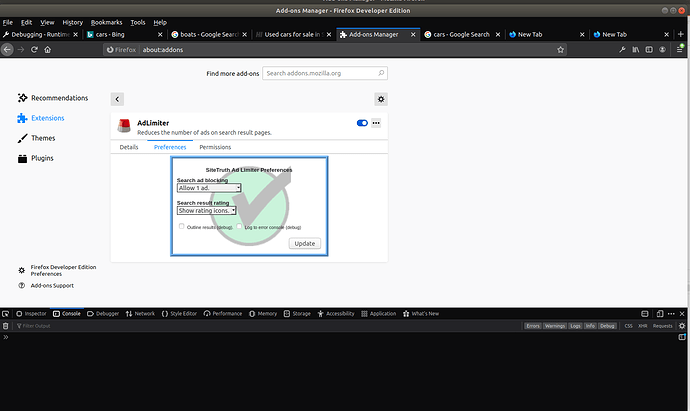 I’m updating my old Ad Limiter add-on. Here’s its preferences menu. It works fine in Release Firefox 78.0.1 64 bit (Linux). But in Developer Firefox 78.0b9 on the same machine, with the add-on loaded from a local file, the drop-down menu won’t drop. No errors in the browser console. Clicking on the drop-down arrows just doesn’t do anything. The other add-on functions work the same on both platforms.

I tested one of my extensions that uses select controls on the Options page and it seems to be working fine in Firefox Developer Edition 79.0b6. I’m not sure why yours is still on 78.0b9?

Let’s be clear: you do not have to use dev edition to develop extensions, you can use almost all the tools in release Firefox - and the only thing that’s not availabke shouldn’t be needed for development at all. However, if you want to make sure your extension will work in the next version of Firefox or if you want to develop against an upcoming feature so the update is ready when Firefox with support fir it is released, you’d use dev edition.