Emoji Flag bug - it will spread

I am on the beta channel of Firefox and had no issues in the past, but I now have to report one which has “already been reported”.
The bug and its cause are known and the fix is known as well.
It is the following bug:

Now why am I talking about it?
Because like the person who reported that bug, this bug occurs on my system, I do have the EmojiOne Color Standard font installed and I also have no clue where the EmojiOne Color Standard font comes from.
I do not have weird or experimental software installed, other than the FF Beta. The font was installed in March 2021 and is therefore newer than my OS installation. I have not knowingly installed that font.

When I encounter a problem, I ask Google for the solution, but Google did not find the answer - a manual search on bugzilla for “emoji flag” gave me the answer.
As I did not intentionally install this font, it must have been installed by a program, and I suspect it was a common one. The closest things which were installed around that time were “The Outer Worlds” (5 days prior), “AMD Ryzen Master”, “AMD Chipset Software”, “Realtek Audio Driver” and “Realtek Ethernet Controller Driver” (all 1 day later).

This means that if the FF 97.0b3 gets to release, the “bug” will occur on many systems, as I suspect the drivers to be at fault for installing the font.

I did not post under the bug, because this is basically an iteration of “I have this problem, too”.
Instead, I just want to make the developers aware of this issue.

It is troublesome that fonts can get installed without a “paper trail” back to what program wanted you to have them, making it harder to know whether it’s safe to remove them.

If you inspect the file properties for the font, can you tell which build/version it is? For example, I found an Adobe .otf file here with a 2016 copyright: 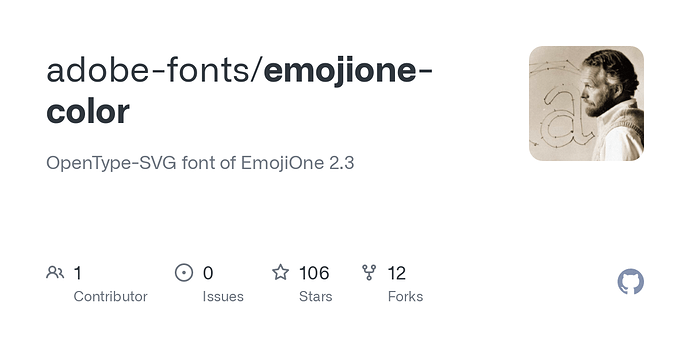 OpenType-SVG font of EmojiOne 2.3. Contribute to adobe-fonts/emojione-color development by creating an account on GitHub. 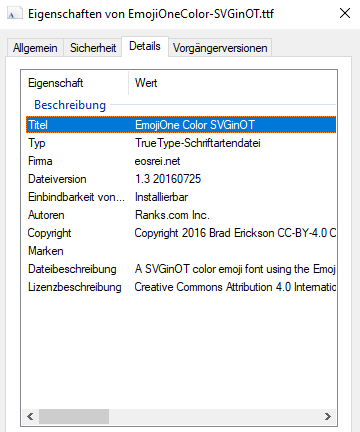 Thanks. I mentioned this thread over in the bug. Since it is under consideration there, it seems best to consolidate.

The patch was approved for uplift to Firefox 97 beta 9 earlier today. I’m not sure quite when that will be available for testing, but probably soon.