Thanks for reporting this. I’d be fine with adjusting this to: Fulah (Pulaar-Fulfulde) (or the other way around, not sure why we are not using the same order everywhere). Before doing that, I saw that you use a non-latin script, do you think it would make sense to use the native language name instead of “Pulaar-Fulfulde”, as we for example do with Abkhaz and other languages? Granted, that might make it a bit odd as it’s RTL (though still want to ask)? 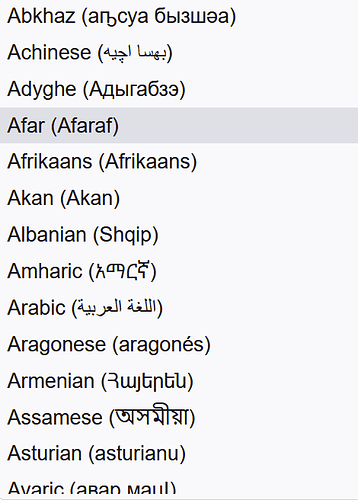 Hi and thanks for replying.
I think there is some confusion here. NO, I don’t use a non-Latin script. The official Fulah script is Latin. Some marginal people do use a RTL non-Latin script but it is just an individual initiative that joined Unicode very recently. And I am totally illiterate in that script!!!
All Mozilla products (Firefox, SUMO, Firefox OS, have always used Latin which is the official script. https://pontoon.mozilla.org/ff/
And Common Voice is 100% localized in the official script which is Latin: https://dev.commonvoice.allizom.org/ff
The language has two native names (Fulfulde mostly in the East and Center of Africa; Pulaar in the West). For all software, we combine the two as Pulaar-Fulfulde. That is the native name of the language.

Hope to have answered.
Ibrahima

Oh, should have read more of the Wikipedia article then, sorry! I’ll adjust this tomorrow.

Thanks!
Fulah has now been completed, what is the next step before we make it to production?
Thanks

Fulah has now been completed, what is the next step before we make it to production?

You will need at least 5000 sentences approved in the Sentence Collector. Once that is achieved the language will be enabled on CV after the next deployment of the website.

Hi again
Thanks. Can I add sentences before the Language naming issue is solved?
Cheers

Thanks. Can I add sentences before the Language naming issue is solved?

Thank you!
Did you have a chance to correct the name?
Cheers
Ibrahima

The name is now changed.

Hi Michel,
The website typography in Fulah in neat and clean!!! Thank you so much for your assistance.
It is just super to see thing evolving in the right direction so quickly!
I find the menu items DATASETS LANGUAGES ABOUT… a little smaller than other languages. Adjusting those would be perfect! And I won’t bother you again

I find the menu items DATASETS LANGUAGES ABOUT… a little smaller than other languages. Adjusting those would be perfect! And I won’t bother you again

Thank you
Sorry, I think it might just be a visual illusion.
Cheers