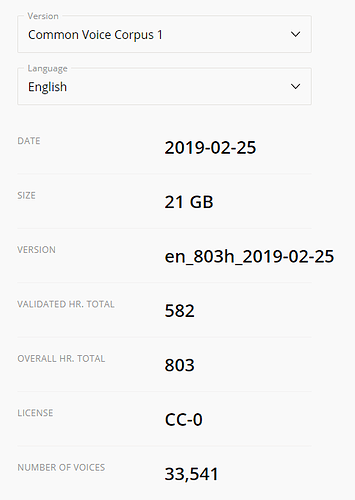 What do you need it for? It could be that the version 1 release is just a re-release with a different date.

@fyters Thank you for your comments. As a background, I was skimming through a 2018 paper on Audio Adversarial Examples: Targeted Attacks on Speech-to-Text which mentions the usage of Mozilla Common
Voice. So I wondered what exact data they are referring to.

Evaluation Benchmark. To evaluate the effectiveness of our attack, we construct targeted audio adversarial examples on the first 100 test instances of the Mozilla Common Voice dataset.

Having explained the background, I was searching and found this post Older English dataset question. I wish I ran into this post earlier but there seems to be an older database with file name of sample-000000.mp3, sample-000001.mp3, etc. This is different from the file names of Common Voice Corpus 1 English which is 128 letters long followed by .mp3 extension.

In principle you should be able to take the first 100 lines of the recent release. I imagine that they are added in chronological order.

Each test/train/dev set is generated non-deterministically, meaning that they will vary from release to release even for minor updates. This is to avoid reproducing and perpetuating any demographic skews in each subsequent set.

so I compared validated.tsv of Common Voice Corpus 5.1 and Common Voice Corpus 6.1. Unfortunately, it seems they change. I presume it is because the upvotes and the downvotes of an audio is continuously tallied for an audio file. In other words, a validated.tsv audio might become invalidated.tsv audio, but I have not checked enough to know. If we go back even further, the file name seem to change between pre v1 (sample-#+.mp3), v1 (128 letters + .mp3), and v6 (common_voice_en_#+.mp3). This makes it so hard to compare.

DNE = Does Not Exist

That’s unfortunate. I suspect that the original release is not available without a substantial amount of effort (but @phirework can confirm), we had a similar issue with the Common Voice paper.

@fyters Didn’t realize that you were an author of the paper. That is nice.

Furthermore, here is few examples that moved from v5.1\validated.tsv to v6.1\other.tsv.