I don’t personally feel the exact same way as this post (The new Unified Extensions Button in Firefox 109) about the new Unified Extensions Button being redundant in the face of the Overflow Menu.
With the way I used the Overflow Menu with extensions, it’s more a complete replacement for me than it is an unnecessary extra.
Though I can understand how it could be annoying to have to have two buttons now where before one was sufficient, for people who also wanted some in-built browser buttons in there as well.

Perhaps the workaround there would be for users to hide the overflow menu entirely and develop extensions that just wrapped those features they wanted accessible, which is not ideal, but would be a way to re-unify those interfaces.
Better still if there were a browser-based toggle to emulate the previous ‘Unified Various Extra Stuff Menu’ behaviour by including both extensions and built-in’s somewhere, without actually requiring a full-fledged extension wrapper (if it’s even possible) for each browser feature.

However, what I do miss is the control I had over how easy it was to access certain things in certain ways.
In that sense, the Unified Extensions menu feels like a definite regression.


For some background, I categorise my extensions into basically three groups, based on how I use them.

This was entirely possible with my relatively respectable extension count of 34 because the breakdown is something like:
Active: 4
Hybrid: 9
Passive: 21

Which made for a reasonably minimalist toolbar with few extension-related icons, and a quite compact Overflow Menu where I could access everything I needed to at a glance, without needing to go ‘searching’ for the one I was after.


The new Unified Extensions button does not currently allow for this level of control/categorisation/organisation/usability/etc.

All those ‘hybrid’ extensions are now hopelessly intermixed with the ‘passive’ ones, and the ‘active’ ones I would typically have preferred to leave at the top of the overflow menu are either now also buried among the ‘passive’ bunch, or I am forced to instead pin to the toolbar.
To make matters worse, nothing in the extension menu is predictably placed, because it sorts them in a strange way that I am yet to determine the logic behind.
As far as I’ve gotten is “First it’s ones you can click to do something with, then ones you can’t”, which doesn’t explain why (for example) these extensions are in this order: 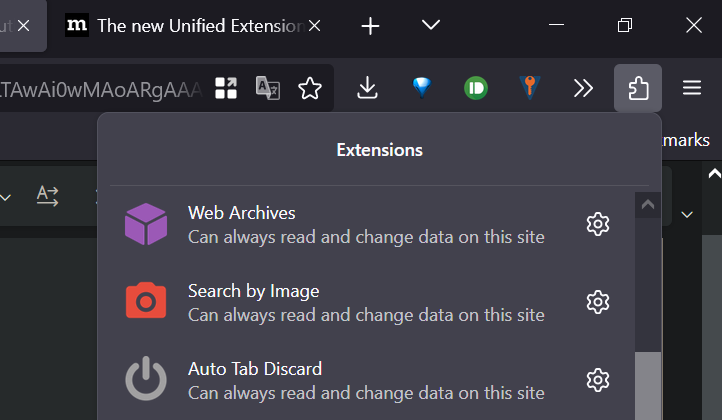 Screenshot example of strange extension ordering722×420 28.5 KB
It is definitely not alphabetical, not even Permissions -> Alphabetical (in as much as it actually shows me any differences between permissions).
Perhaps it’s the order I added them in, but that doesn’t seem correct either unless they were installed in a random order when syncing my settings onto my new machine.

Each extension also takes up WAY more vertical space than entries in the overflow menu: 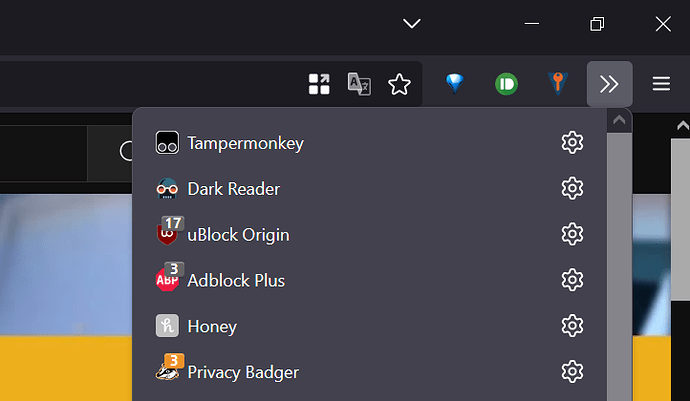 Which, combined with less ability to be selective about which are seen and in what order, makes the menu very cumbersome to use.
You can’t even start typing into a textbox to filter or jump to what you know you’re looking for, you just have to scroll to the right bit or scan for the (hopefully sufficiently distinct enough) icon.


My suggestion(s) to make the new menu more useful, more user friendly, and less cumbersome, would be to do some (or all) of the following:

Also, I hope it would go without saying, but for these user-specified configurations (categories, orderings, scaling, etc), I would like to see them synced through FFSync.
Since extensions are already ‘in-scope’ to a degree for the sync, I’d hate to see FFSync be overlooked/regress extensions-wise, as the Unified Extensions button became fleshed out more.
I’d also like to see more basic things added to FFSync, like the default search provider setting and whatnot, but that’s a different story.


In conclusion… I’m not exactly opposed to the Unified Extensions button, but while adding a new button to address a technical limitation with adding new security based features (which it sounds like was the reason) is an understandable necessary evil…

Please don’t stop short of making it as useful or more so than the previous features/functionality it’s replacing.
Particularly since we can’t choose not to switch.
Particularly since the new security feature is something that will be interacted with and relevant far less often (only really if/when it changes), than people actually trying to use the extensions.