"Add-On Appears To Be Corrupt" Nonsense

So, I’m developing a (currently unpublished) extension. I really want to be able to use it on the daily, to be my own quality assurance. Unfortunately every time I’ve tried to install my add-on, it errors with “This add-on could not be installed because it appears to be corrupt”. I’ve gone down the rabbit hole, done everything I can, all to no avail.

This is everything I’ve done and am sure of:

Is this a bug? Or am I extremely ignorant?

Assuming signatures are not required, the error message you’re getting implies that there might be some stray files in your .xpi archive. The expected result is this sequence: 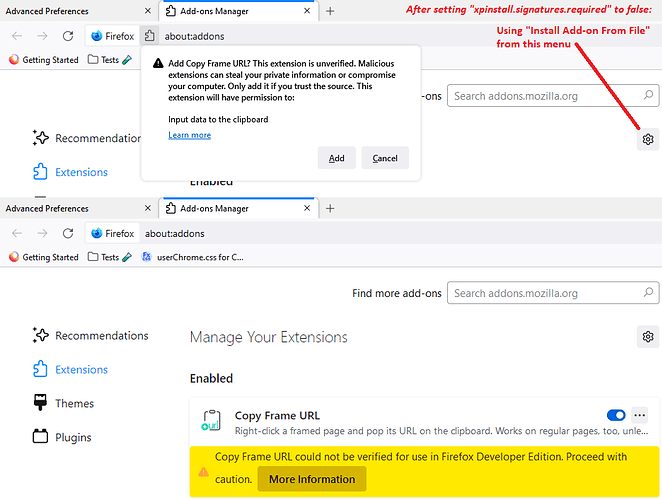 If you want to test that file, it’s the attached one, but I renamed it to .xpi before installing from the Add-ons page menu, “Install Add-on From File”.

Hi, I’ve removed all stray files from my Add-On, and it still doesn’t work. Although I’ve managed to conclude that it must be something wrong with my zip command, as I’ve rezipped your extension, and after doing so it miraculously was corrupted. I’m zipping with no compression which according to the documentation should be fine? I’ve also tried compressing with the deflate method, and it still doesn’t work.

I’m not familiar with the details of the ZIP protocol. If you extract from my file and from your file, do you get the identical results (i.e., same folders and hierarchy)?