This month brought new feature releases to the Common Voice site that will especially impact those of you with a Common Voice profile. Here’s the tl;dr:

Custom goals made available in all languages

Earlier this year an English-only beta experiment was launched to test an idea: enabling a way for people to set custom goals would lead to more regular contribution to the project. Overall the engagement numbers were modest for the beta — 126 profile owners created a goal during the May 1st – June 15th period. What started to signal experiment success was the duration of time those who set goals spent contributing — 12 minutes on average — compared to those who did not — 4 minutes on average. Contributors who set goals spent three times longer contributing than their non-goal setting counterparts. On top of that, those contributors with goals set were 64% more likely to return to Common Voice and contribute again. Goals were indeed leading to more, regular contribution.

Scaling up from the beta to make goals available across all languages became an obvious priority for the team following the experiment. As of this month, you can now create a daily or weekly goal for both speaking and listening in any of the launched languages on Common Voice. From the dashboard Stats (“Create a custom goal” button) or Goals pages you can set up a new goal regardless of the language you are localized to. 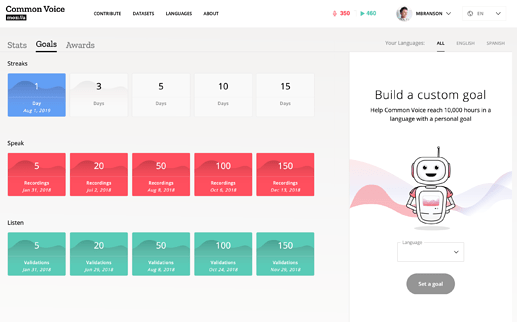 A note on email: As you set up a goal, you’ll notice that an opt-in for goal reminder emails is available. At this time those emails will only be available in English as we actively work with the Mozilla email marketing team to localize these emails into the languages they currently support (Spanish, Portuguese, Russian, German, French).

In order to implement the new feature across languages, various places in our code base needed some updates. Previously, on the backend side, we would initially re-compute the Goals page anytime someone navigated to it. Since information about goals achieved was now also needed in other places (e.g. goal reminder emails) the code has been updated to (lazily) persist that data. The result: this data retrieval became cheaper and the Goals page now loads faster for power contributors (for whom the computation got quite slow).

On the frontend we added all of the strings into our localization system and thanks to the work of our community, we received localizations of those strings for popular languages in no time. We also changed the routing in the dashboard section to include the currently selected language in addition to the localization language (e.g. /en/dashboard/fr/goals) as we now have several interactions that send you from one dashboard tab to another.

In an effort to improve the usability of the top contributors leaderboard, two new interface controls have been added. After taking a scrolling trip up or down the leaderboard, you can now toggle your ranking position back into view by engaging the bookmark icon at the top right of leaderboard. 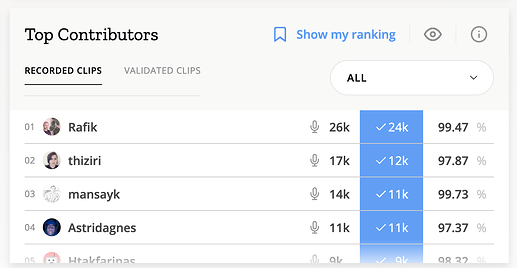 Next to the new bookmark icon, you’ll also notice a new eye icon. You can use this icon to set your leaderboard visibility directly from the leaderboard itself. Previously this functionality was only available on the profile page — now these two controls are linked. Note that it takes around 20 minutes for the leaderboard to refresh, so changing your visibility won’t take immediate effect. 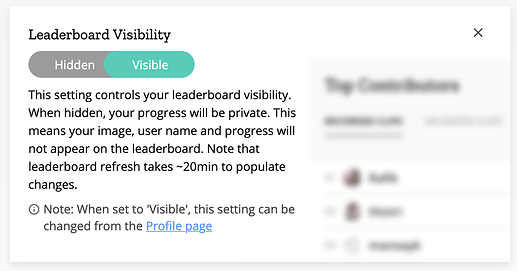 As always, the goal with these releases is to improve the overall Common Voice experience and build a dataset of voices anyone can use to train new and innovative voice-enabled applications. Ready to set up a goal in your language or try out the leaderboard controls? Log in or create a profile and let us know what you think.

Megan, on behalf of the Common Voice Team

Perfect, I was looking forward to this feature, thank you for making it available for other languages. It will encourage people to participate more, and effectively.
Thank you very much.

@slimane.amiri thanks for sharing this with the community on our FB page