Hello, I’ve got a problem with one of your extensions… And that’s metamask!
3 months before someone stole all my crypto in the metamask i had, now after 3 months someone did it one time more! from 3 different metamask accounts, now I know how he did it, the metamask was corrupted and fake, but it worked? So it was called in your website addons.mozilla.org “Metamask Wallet” i think the developer was named Consys, so I ask you for informations about him, I would like to report him to police and sue him. As a long time user of Firefox, I would like the firefox team to be cooperative, I am waiting for your response.
Thank you in advance!

The problem is with an extension that is no longer listed? I don’t see one matching your description:

I am not aware of a mechanism to request developer information that is not disclosed publicly. You could have your attorney contact Mozilla’s legal department to discuss.

First I want to thank you for your response!

Yes it was removed one month ago, and I have the browser history this is what it shows me if i run it from the history and there is also the hash or whatsoever 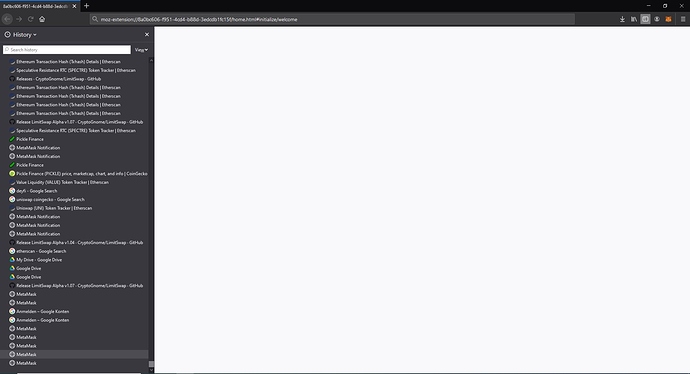 I only want one information, if i get a lawyer will you give then the information needed?

I’m not a lawyer and I can’t offer legal advice. You need to talk with a lawyer about how you want to move forward.

You may want to extract your history using this tool as well:

Thank you Mr and Mrs for the response! You did help me I’ll be back to you with my lawyer shortly.