Move tab from container or to container

This is very useful but somehow it must have the ability to move one opened tab from one container category to another or remove it from category.
of course the same for a tab with no container category into one.
There are many cases where you open the new tab from the link without the option
Open Link in new container tab (z)…

After using containers for 30 minutes I discovered that:

I guess it would be most easy to handle this from the addressbar where there is already the icon for the corresponding Container. Except for the tabs which are not in a container (yet), it needs a _blanc Container-icon.

Or even if I could drag and drop on the Container icon like I do bookmark folders in the bookmark toolbar. This would be really useful if you could move tabs between or into containers but until then this tool isn’t something I am likely to use.

For me that’s a blocker.

I also want to highlight, you are able to drag and drop the (i) icon in the address bar into a blank new container which is slightly simpler than:

We have spoke about:

Our goals for containers were less on the tab management side, so whilst we understand the frustration we also don’t want to stop our core goal of improving web privacy.

Our goals for containers were less on the tab management side, so whilst we understand the frustration we also don’t want to stop our core goal of improving web privacy.

I’d suggest that something like that sentence should be prominently displayed in the presentation for the Containers project. Because initially it sounded to me like tab management (colored tabs!), and this focus on privacy means that actually this is much less interesting for me. (I will still probably try it, but not “right now”)

Well it’s not like we are trying to prevent tab management at all. I want to enable as many of these features as possible when we can. It’s just the experiment is run by the security teams and we were looking for ways to make containers more approachable.

… When I’m browsing and I think of something I want to do/say using a different account, it’s fairly cumbersome to …

The potential for cumbersomeness arises not only whilst browsing (with Firefox). Any number of actions in applications other than Firefox will cause a URL to be opened in Firefox.

about:profiles and multiple instances of Firefox

From post 7 under Let’s get a desktop screencap thread going - The Lounge - TrueOS Community: 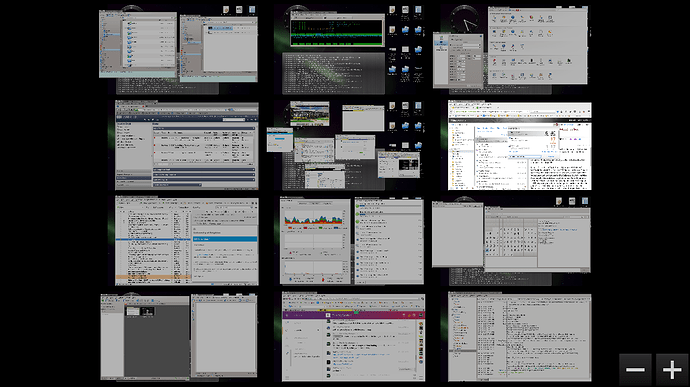 Most windows of Firefox are on desktop 5, using my ‘everyday’ profile.

Desktop 6 contains windows from a separate instance of Firefox, using a less heavily extended ‘minimal everyday’ profile. In the shot above, it’s an Outlook Web App (OWA) window. I also use this profile for LANDESK. Rarely any more than two apps.

tl;dr I typically have no more than two instances of Firefox, and I know that I can’t drag a tab from one instance to another, so before I follow an http or https link from any other application, I have a mental note to check that the required instance was most recently in front.

With only two instances (comparable to two containers), and with only one or two apps in the second instance, it’s relatively easy to remember whether the required instance of Firefox was recently in front before I follow a link from, say, Thunderbird (desktop 7). 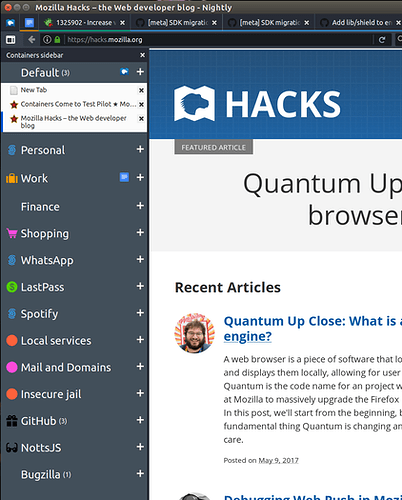 With fourteen on the go, I’d find it relatively difficult to remember whether the required Container of Firefox was recently in front.

So … how should the operating system behave when, for example, clicking a web link in Thunderbird?

Should the OS bring Firefox to the front without opening of the link by Firefox? Should Firefox present a confirmation dialogue? For example:

Are you sure you want to use your Work container for this address?

– or words to that effect.

… actions in applications other than Firefox …

Cross reference comment 3 under Mozilla bug 1323873 - Allow tabs to change user contexts when navigating, the first of two use cases:

I get a lot of links sent to me via email/irc/etc and when I click on them they open in a normal tab. Often these links are to something where I need to be logged in (e.g. github) so I get a login or 404 page, have to copy the URL, open a new container tab, and then paste the link. This is a terrible workflow.

It is, without a doubt, going to be necessary to allow users to move tabs between containers if this feature is to gain any traction. There are simply too many cases where I want to switch and maintain context.

Discussion continued here: Feature Request: A way to change the container of the current tab