An ofrenda to tech ghosts

This session is facilitated by Kara Carrell

We all change, and we all die, but our code lives on forever… Or Does It? This session will take a look at dead (or dying) projects, and the impact it has on our lives. As Dia De Los Muertos teaches us, people live on in the memories we leave with them. How might we apply that to our work as we become maintainers ourselves? Last, there are many reasons why a project may die. how might we prepare ourselves to honor the wishes and the original vision of maintainers as they take that step to move on from their work?

An Ofrenda To Tech Ghosts

Build an Ofrenda for tech ghosts

Attendees were asked to think about 3 projects, products, or people that are no longer with us, use a placard to name each one, and in the back, write something that they cherished or was helpful about it.

In small groups, Attendees talked about loss and tribute, in tech and in our personal experiences, while sharing about (at least) one of the placards they wrote.

Where did this talk come from?

In my role as a consultant, we have clients whose projects we maintain, and while addressing a ticket, I came upon a dependency that had been abandoned, AND a fork of that dependency also abandoned, which led to the question, “what happens when maintainers are no longer available, or worse, what happens when they die?”

This led to also consider what it means when products are no longer available to us, and the emotional connection we hold to them.

What is Dia De Los Muertos?

Terms and concepts I learned from researching this topic

How do folks deal with abandoned projects right now?

How do folks deal with death in open source right now?

What lessons can we take from Dia de los Muertos?

In groups, Attendees were asked to try to answer one of these questions:

Images of the Ofrenda

In addition to the placards that attendees created during the session, the ofrenda included the 23 names of trans folks who were murdered or committed suicide in the US in 2019.
https://pbs.twimg.com/media/EH0CFoLXUAA-f5E?format=jpg&name=4096x4096

How to continue the discussion

How do we plan for the end?

Resources for practices around death and open source

Hey @KaraAJC… I didn’t get to go to your actual session as I was wrangling the Openness Floor but as someone who has family traditions that include Dia de Los Meurtos, I loved your ofrenda and how it honored those (projects or people) that have gone before us.

Thank you for including these notes w/ links to resources. I’ll be returning here for thoughts & ideas as I manage projects that move into “another internet plane”.

Kara, here’s an image of the beautiful installation you created at the Festival. 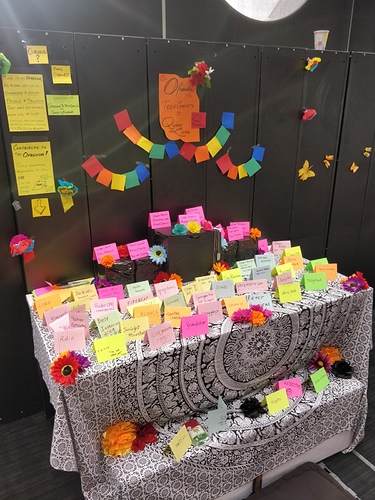 Thank you so much! I’m very interested in hearing how folks think more about death and open source, so i’ll be keeping an eye out for thoughts!

Thank you for sharing this!

Wanted to share this inititative Github is doing on archiving open source for 1,000 years: https://archiveprogram.github.com/