I’ll be mentioning this in a company-wide email shortly, but I wanted the community to hear about it first. I’m very happy to be able to tell you about two tools that we’ve just finished standing up.

The first is a new, up-to-date version of Etherpad, stood up behind IAM:
https://pad.mozilla.org/

With much gratitude for the Participation Systems and Open Innovation team’s work, backed by Adam Frank of Mozilla IT’s SRE Team, we’ve been able to get Etherpad brought up to a modern version, running on Mozilla infrastructure and protected behind IAM.

The old Etherpad has been out of date for a long time, and some bad people are using it for bad people reasons; I’ll talk some more about the decommissioning process later - we don’t want to orphan anyone’s work, for sure, so we’re not just flipping the switch immediately - but we’d like to make the switch soonish. I’ll be reaching out to the Reps and other community groups soon to work out what “soonish” means.

One perhaps-important caveat about New Etherpad: we’re treating it as a temporary data storage solution, not a permanent place for docs to live. Pads that are idle for seven days will be reset.

That “seven” number is also negotiable, and again I’ll be reaching out to the Reps and other community groups soon; we don’t want to commit to data in Etherpad being permanent, so we should have a discussion about it that I’m looking forward to.

The second thing is, we’ve also stood up a modern Pastebin tool!

There are a few differences here as well. This one isn’t behind IAM, because we often want to pastebin stuff from machines we shouldn’t put our credentials into. That said, our previous (also old, also crufty) version of pastebin didn’t have an SLA or official support and the options we offered included a “keep forever” option which turned out to be a huge lie that had never worked, so that was bad and we’re not doing that anymore.

As well, we don’t want our infrastructure to be arbitrarily misused by the aforementioned bad people, and definitely want the pulldown menus on the services we provide to not be full of lies, so the options available on our new pastebin are “one-time load, one hour or one day”.

Again, thanks to everyone on Participation Systems, the Open Innovation team and Mozilla IT’s SRE Team for their help and support getting this over the line.

Thanks for this @mhoye

In mozilla pastebin the design of the title on mobile is broken. It seems that the title is too long for the page layout. 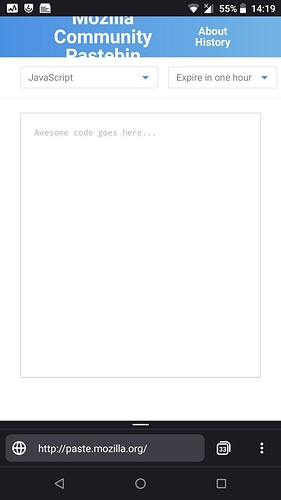 Yuck. Ok, we’ll look into it, thanks for letting us know.

Hmmm. No, it isn’t. I’ll file a bug; thanks for letting me know.

When I try to open/create the “test” pad in etherpad, I’m getting this error:

reported with the following id: ‘L3p0XminW9EvqFwNToGB’

I’m running Nightly on Windows here, and I can’t reproduce what you’re describing; that URL gives me an empty pad called “test”. Is there anything idiosyncratic about your setup that might be causing you to see something different than I am?

Nah its working for now too, so it must have gotten fixed in the month between my message and your reply. (either that or it was just having issues the day I tried to view the test pad.)

This may have unknowingly been made by an employee.

I sent Unable to access pad.mozilla.org to eus@mozilla.com and got this response from Riccardo Valabrega

Thanks for reaching out to us. You will need an NDA to be able to join the new istance.

There is more info here on the link, New Pad, New Paste

You will need an NDA to be able to join the new instance.

That should not be the case, but figuring it out and fixing it is my responsibility.

The new etherpad should be now working with any account. I’ve just tested with my personal Firefox Account.

Yes. I can confirm too.