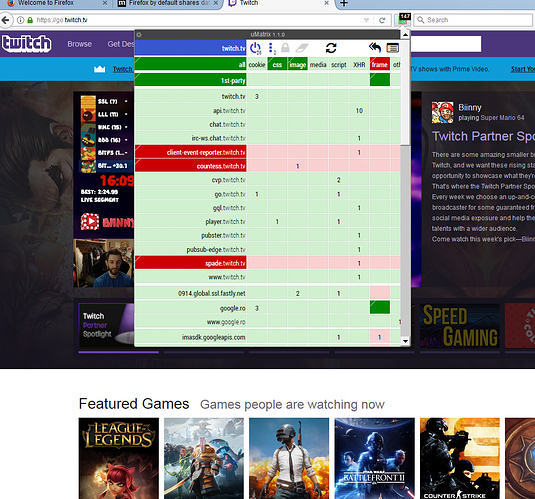 Bug report : Installed clean (profile and all) firefox 56.0.2 with only umatrix 1.1.0 and the UI has some issues like shown in the picture

Also theres a issue with scrolling when hovering on the list , it will reset and keep scrolling to top unable to configure using the UI on firefox 55.0.3 with 1.1.0

I know the 1.1.0 is listed for 56+ but the lagacy 1.0.0 has some issues when using the logger , could a hybrid webextension or the 1.1.0 version be optimized an also used by firefox 55 and above with the loggers bugs fixed ?

it looks like the issues has been reopened in github, thats great. But still, I might not open a feature request because of the contributing guidelines

As I said before, I propose not to reject feature requests, but to make clear that there is no time to take care of by the developer.

Furthermore, to increase attention for the issue guidelines, you can put them directly in the issue form field like show here: https://github.com/nextcloud/server/issues/new
But I think its much better to keep them very short and expressive, not like in the nextcloud example.

Umatrix has no interface in pop ups.

Okay I figured out how to get the interface to appear (why I deleted my post) but the site still isn’t working. It’s the deviantart download button. Is this a good place to ask about how to get particular sites to work?

Give me a specific URL where you have the issue, I will see what is going on.

That button does some kind of third party request but I haven’t been able to figure it out.

That button does some kind of third party request but I haven’t been able to figure it out.

Ok, it took me a while to figure it out, it’s something to do with Firefox pulling the image from its cache. You need to whitelist the wyciwyg-scheme scope. wyciwyg-scheme really means that Firefox is pulling the image from a sort of wyciwyg: URI (its cache I believe), and since that scope is not whitelisted by default, this was breaking pulling from the cache – that is about as much as I understand for now.

So anyway, create this rule in My rules, then persist, issue should be gone for good. I will add it to uMatrix’s default ruleset.

I think wyciwyg means “what you cache is what you get”.

So far so good. Sweet, thanks. This has fixed some issues I was having on other pop up sites as well.

I was testing uMatrix and just now I had an issue where I couldn’t log into twitter.com, even after turning off matrix filtering for all twitter.com and all per-site switches, I couldn’t figure what was going on.

Once I turned off matrix filtering for behind-the-scene (including turning off all per-site switches in that special scope), I could log in fine on twitter.com in default-deny mode with only twimg.com whitelisted.

So anyway, this is just to point out that sometimes we have to look everywhere when trying to un-break a site.

I would like to see a redirect path on the “uMatrix has prevented the following page from loading:” page. Currently, I copy and paste the blocked redirect link into http://redirectdetective.com/ to see the ultimate destination. Simply add the redirect path below the blocked link with an option to click directly on it. This would be a useful feature.

Hi @gorhill
I use uBO and uMatrix for a while so I first want to thank you for your work!
Yesterday I noticed in the changelog that you started supporting uMatrix on Firefox for Android

I have immediately installed the WebExtension and noticed the lack of a custom logo on AMO.

Since I can’t help in the code I’d like to suggest a few creations.
Thank you again.

If you are interested I can modify them for your needs of course.

why is my uMatrix dashboard gray after 10 minutes and the pages are not working anymore. even if I reload it without closing the browser. When I close the browser and open it all goes for 10 minutes.

Initially uMatrix worked as it should, but for the past few days clicking on the scope selector (the blue bar at the top-left) just highlights the text instead of being able to select from, say *, domain.com and www.domain.com.

Also, I fairly often find that the refresh button doesn’t always reload with the new permissions. In Windows, CTRL+R also doesn’t work, but CTRL+F5 does.

Amazing add-on, BTW. The user-interface is perfectly designed. It’s so intuitive to use, and more flexible than NoScript.

Is there anything I can try to get the scope selector working?

ust highlights the text instead of being able to select from, say *, domain.com and www.domain.com

The highlighted text is the current scope – there is no more dropdown list. See release notes.

When there is such issue, try holding the shift key down when clicking reload, sometimes it may happen the browser’s cached responses are causinf the webRequest API to be skipped.

Is this by design or a bug?

By design. uMatrix by its nature will not let your browser establish connections to the outside world if network requests are meant to be blocked – hence it internally disable pre-fetching, pre-connecting and pre-dns lookups.

Using Firefox 57.0.1 and uMatrix 1.1.16. I would like to force Gmail login screen to use the older style input fields. This is because the current version of the login does not automatically log you out on browser close. If one disables Javascript on accounts.google.com under Chrome it forces Google to serve up the older login screen.

However in Firefox when I enable the newly added "Spoof tags when 1st-party scripts are blocked" and then go to accounts.google.com scope and block Script and reload the page for gmail login nothing displays. Am I trying to do the impossible here in Firefox? Unlike Chrome which allows you to block Javascript from within the browser settings itself Firefox doesn’t.

By the way this is after I reset uMatrix back to its default settings since I had imported a bunch of rules I had built up in Chrome over the years and thought it was best to start from a clean slate.

then go to accounts.google.com scope and block Script and reload the page for gmail login nothing displays

I see a <meta http-equiv="refresh"> in the <noscript> tag. However as noted in the release notes, for some reason Firefox does not execute the redirection.

I thought Google would be considerate enough to put in a link that can be clicked manually, but I see it’s not the case in the current scenario.

So I will need to execute the redirection manually – but only for Firefox, since it works fine with Chromium. I will try to fix this for next release. Another solution is to insert a link to be clicked manually.

Ya its a never ending battle of wack a mole with browsers it seems. With Chrome on Windows you can block javascript within Chrome itself. That I do not think is possible in Firefox 57 at least.

When you say a link to click on is that a link to a javascript with a <meta http-equiv="refresh"> in it? I use multiple gmail accounts that are all logged into during a browser session. Just wanted to make sure that it was not an oversight on my part with some setttings in uMatrix that I did not set properly.

Just wanted to make sure that it was not an oversight on my part with some setttings in uMatrix that I did not set properly.

I just published a release candidate with a fix for the <meta http-equiv="refresh" ...> in it:

See it this solves your blank page issue.