As you know we are in the middle of running the first Group Registration Pilot. The pilot invited 9 groups from India who met the requirements, to register as part of the pilot, and complete a survey. Group contacts and members were invited to regular calls, sent regular emails. The goal was to increase visibility, collaboration, knowledge sharing, and awareness of contribution opportunities among groups who participated.

The 9 pioneering groups who volunteered for the first pilot are: 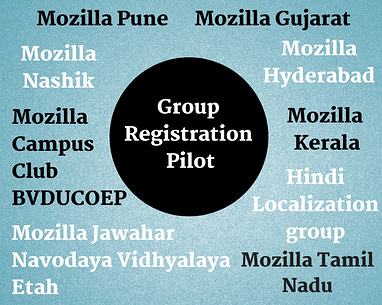 After the pilot ends at the end of this month we will collect feedback from these participants and share findings and the results of this initial pilot with a post here on discourse. 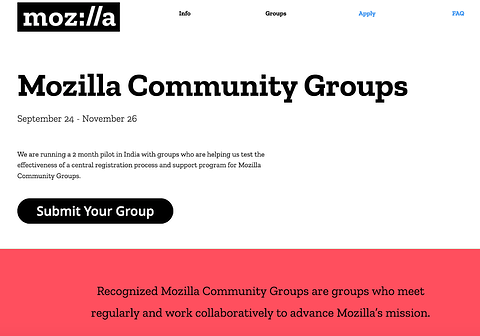 But it doesn’t end here!

Based on the feedback and results from the initial pilot, in early 2019 we will launch a second version of the pilot that will seek to provide more value and function for group contacts and members. We will do this by introducing new offerings, tools and processes, based on the feedback, we already know these will include, simplifying the registration process, finding new ways to surface better contribution opportunities, giving groups more control over the appearance of their group page and identities.

We hope that this second pilot will be open to all eligible groups in India and will teach us even more about how we can support community groups at Mozilla.

Assuming the second larger pilot is successful, the goal is by the end of 2019 to be able to open up a registration system to all of Mozilla’s Community Groups. Including existing groups like Campus Clubs (read more here!).

This is part of advancing the Mission Driven Mozillian Project which seeks to create modern unified structures and processes to optimize the health and impact of Mission-Driven Mozillians communities.

All of this is obviously dependent on a lot more learnings, creating better tools, and offerings we hope but with your support, by the end of 2019 we will have amazing new ways for Mozilla community groups to get recognition and support.

If you’re a community member who didn’t participate in the Pilot and wants to share your thoughts with us, please refer to this post and fill out the survey.

I am not sure how to add the upcoming events or the events have happened in past 2 months. Wondering what is the main reason for this pilot.

Are you missing something here ?

Hey! The goal of this pilot is to learn about how a central Mozilla Community Group Registration process can bring the most value to community groups. By the end of 2019 we hope to have a tool and process that will let all eligible groups “officially register” with Mozilla.

If your group is part of the pilot you should add all your members to the page so they can receive the newsletter, be invited to the “Pilot calls”, and give feedback about the pilot.

Right now we’re using a tool called “Splash” for the pilot but in 2019 we’ll start building a custom tool for hosting groups, it will be connected to Mozillians but with more functionality and requirements than what’s there right now (the pilot will help us define this functionality).

RE: Campus Clubs - once the full registration process and system is ready we’ll be inviting all campus clubs to register through the official Mozilla group process, obviously this won’t happen until all the pilots are done and the tool is ready, est. end of 2019.

For now, to add your events to your group you can create an event in Splash via events.mozilla.org and then add the links on your group page.

The goal of this pilot is to learn about how a central Mozilla Community Group Registration process can bring the most value to community groups.

I believe the method is flawed here. You’re using a “pre-pilot survey” which is compulsory to participate in the pilot. The members of community groups who don’t fill out the survey are excluded from the pilot.

What useful insight can you gain from this exercise?

The pre-pilot survey helps us get a baseline which we’ll re-visit through out post-pilot survey. This “bookend” format helps us understand how people’s feelings change over time and exposure to the offerings of the pilot.

We’ll also solicit feedback and ideas from people who chose not to take the initial survey at the end of the pilot, though from them we won’t be able to measure baseline change.

Can someone help me understand where I’m getting the logic wrong?

There was a survey. The survey said people identified themselves as part of groups. Ranking wise they said contribution areas, then program, then country, and then region.

And then a pilot was launched and 8/9 of them are region based groups. And no matter what the result of the pilot is, by end of 2019 there will be open registration for more groups.

Now, the last time I asked about how this is not going to fragment the community, I got a response

We will be getting more insights through this pilot to understand the situation, words like “fragmentation” can have a negative meaning and I would avoid any assumptions until there is full clarity on how people are working.

Is there already full clarity on how people are working? What is the clarity that we have?

I ask only because in a failed attempt at restructuring, there was an intentional attempt to reduce the importance of geographical groups so that there is more collaborations.

Now, it may have been wrong to discredit geographic groups like that.

But look at the things you are forced to build because of allowing so many groups:

You are essentially first creating 1000 groups and then trying to bring them together on a central platform.

What is the logic that makes this tick?

To add, I am now more and more inclined to form a small group of my own and work in my own comfortable silo (because “that’s the way I work”).