How to deal with retaliation reviews?

I have a small extension called Global Speed.

I recently noticed some guy copied my code and created a clone called SpeedUp. My extension was open source, so it was fine and all. But, this guy added an Amazon link hijacker. Essentially, finding all amazon links and adding their affiliate tag. This is not ethical, as they would make a commission of every amazon purchase a user made (and is also against Amazon’s rules), and in certain cases, stealing the commission from someone who deserved it.

I gave him a negative rating to warn users. He is now retaliating by giving me 1 star reviews as well. My extension was 5-star, but is now 2.3 stars. Two negative reviews can do a lot of damage to the overall rating when you only had 1 review.

I’m wondering if there’s anyway to have his reviews removed.

Edit: He just created another fake account and gave another 1-star rating. My rating went down to 2 stars. This is pretty much a death sentence for my extension.

Anyway to resolve this? At this stage, it’s unlikely it would organically recover because no one will download a 2-star extension.

I am very disgusted with your situation. I feel your pain and am totally solidary with you in this.
The behavior of that person is obviously extremely suspicious and it is very easy to verify the evidences you present. That individual doesn’t even have a public repository, and his “support” site is a rather strange web page. So it doesn’t take a genius to get very uncomfortable with all this and recognize a very unclear (to say the least) position for the other author.
For what is worth, I have posted a comment at the very suspicious add-on page. I expect a violent retaliation, but I have no code published here with this account, because I would not be able to tolerate dealing with that type of characters.
My blood boils when I see how easy is to destroy an honest work. It’s the Internet at its worse. But that doesn’t mean we have to accept it.

Essentially, finding all amazon links and adding their affiliate tag. This is not ethical, as they would make a commission of every amazon purchase a user made (and is also against Amazon’s rules), and in certain cases, stealing the commission from someone who deserved it.

If the extension goes against the Mozilla policies, you should report it. On the extension page there’s a button for that (See screenshot below for an example) 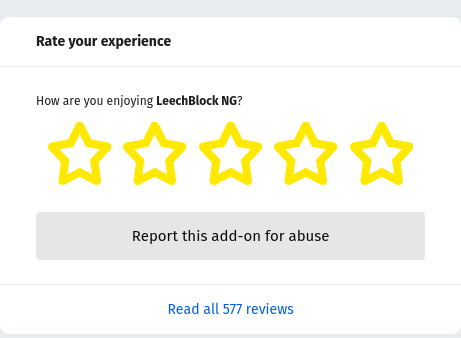 Thank you for the support. He replied to your review. And made some accusations that I will defend against.

You are such a hypocrite. You create your own fake accounts by various names (@blazeMonkey, @fossLover, etc) and accuse me of something you are so guilty of doing yourself. Atleast, I am not the one hiding behind the fake aliases @Polywocker.
The last review I had was 1 month ago, then in a span of 1 day accusations from various accounts claiming I copied some code, this is clearly acting out of spite.

This is interesting. He thinks I posted that and might genuinely believes I’m doing the same to him. I’m in fact not, but I know why he’s receiving negative reviews. I made a few posts on relevant subreddits [1] [2] about his extension having an Amazon link hijacker.

Let me tell you this mister, I have not copied your code, its the other way around - I will say it yet again. My extension was published on 1st April’ 19 and your github repository has first commit on 1st Jun’ 19. That’s the date when you started copying my extension’s code to make a fake clone of yours. Everybody can cross-verify the same since you guys can see the different published-at dates on both extensions. This guy is behaving out of spite since he was expecting to copy code from my extension and get tons of more users than mine, which unfortunately for him, couldn’t happen. Now here he is pointing accusations at me trying so hard to accuse me of wrongful things. All this is coming from the developer who rated his own add-on 5 stars from multiple fake accounts. I wish you all the best for your recovery from all the burns. If you thought I wouldn’t retaliate after all the false, defaming accusations you made, you are so living in Utopia.

PS: I am urging @mozilla team to take down his copied extension ( https://addons.mozilla.org/en-US/firefox/addon/global-speed ) and block this developer from ever publishing his plagiarized add-on.

The only truth here is that my github repo was published after his extension. However, that’s also misleading. I originally shared my extension on May 2, 2019 (dated proof). He published his extension 2 weeks after I shared mine on Reddit. I did not yet share the source code at that time, so he must have used a CRX viewer to inspect the code (plain javascript, no tooling, equivalent to real source code). My extension at that point was very simple, but I could tell he copied my extension because CSS declarations he didn’t remove (that are actually useless to his modified extension), and function declarations that were exactly the same.

Here’s a link to an online CRX viewer of his extension. I linked the Chrome version because the Firefox version updates quickly (in case he changes stuff). The Amazon link hijacker is inside content.js. Also a link to the old version of my extension for comparison.

Just filed an abuse complain as it may break this rule.

“Unexpected” features are those that are unrelated to the add-on’s primary function, and are not likely from the add-on name or description to be expected by a user installing that add-on.

Should an add-on include any unexpected feature that falls into one of the following categories.

Then the “unexpected” feature(s) must adhere to all of the following requirements:

Listen. Now it has been said, addon creators are waiting. It must be developed. I mean fast enough for the OP of this thread.

This is my fifth post in row in this thread. (See my thread in Meta about that).

And I can not be punt under pressure nor be insulted.

This power abuse must end immediately. Clearly this is just some constructive initiative, a mistake has been made which can lead to consequences that must be taken.